From Inishkea and Back

A few years ago I read the poem ‘To Inishkea’ by Katherine Tynon.

I read this poem while trying to find out more about the Inishkea Islands. Most people I know would never even bother to learn about the Inishkea Islands. After all, they are simply two tiny islands off the west coast of Ireland, hold nothing of importance, and have been abandoned since the 1930’s. I would never have cared about them either (or heard of them) except for the excitement that my Grandma had expressed when I told her that I was planning on studying abroad in Ireland during my senior year of college.

Two days later, I found myself alone in my freshman dorm room, researching the Inishkea Islands on my laptop and signing up for an ancestry.com account in my enthusiasm to find out more.

What I found out that day is that the islands were abandoned in the 1930’s due to a storm on the night of October 28, 1927. Ten men from the islands perished in the storm, caught out at sea when the storm hit. The death of these ten men, was the final blow for many of the islanders. “Ten of the most experienced and able fishermen have been lost, and this will mean the end of the fishing industry here. In addition to losing their breadwinners, their families have lost curraghs and gear, they face starvation” Fr. Dodd, the parish priest of the Inishkeas said in an interview after the tragedy (Islands of Storm, James Charles Roy, p. 243).

The Inishkea islands were not the only islands to suffer this fate. Many other islands were abandoned over the last century, their populations decimated mainly by the emigration of their youth to the mainland. The most famous of these abandoned islands are the Blasket Islands off the coast of southern Ireland.

Despite the lack of history about the islands there have been a few lone souls interested in them. One of them is the archaeologist Francois Henry who did some archaeology work on them in the early 1930’s.The only thing of importance that she found was the remains of seashells from purpura lapillus permeating the area around Baile Mór. She concluded that there had been an early monastic workshop on the islands, producing a purple dye which was possibly used to create manuscripts at other monastic sites around Ireland.

In 1940 author T.H. White visited the islands and recorded the legend of the Godstone (also known as the naomhóg) in his book The Godstone and the Blackymor. The stone supposedly had the power to control the weather, preventing storms when the fishermen were out and creating one to bring in a wreck when a ship passed nearby to the island. At the end of the nineteenth century, Fr. O’Reilly, the local priest supposedly threw the stone into the sea. When he died a short time later, the islanders blamed his death on his destruction of the Naomhóg.

While I haven’t found out more about Ellen, I did find out William is listed on the Griffith’s Valuation of 1858. I also found out that they immigrated in 1863. At first I thought it was kind of odd that they immigrated so many years after the potato famine. I would have thought that it would have been harder living on the islands during the potato famine (1845-1852) and that they would have immigrated during this time period. I was wrong. According to a few books that I have read about the islands, the population on the islands actually increased during the famine, quite the opposite of what was happening throughout the rest of Ireland.

And then, as often happens when studying genealogy, it seemed that I had hit my brick wall.

So today, when I got in John’s taxi and headed off to Blacksod and the Mullet Peninsula, I was not expecting much. I was hoping for a good picture of the islands at best, since I would not be able to actually visit the islands (boats only run in the summer). As it was raining when we left, I was praying pretty hard for some sunshine!

What I got was much more! Though by family history standards, it still isn’t much, but I will take what I can get. We arrived at the Ionad Deirbhile Visitor Center at about 10:30. Marina Monohan greeted me and asked me what I was interested in. She then proceeded to give me the index to 30 some different binders that they had full of historical information about the islands and the surrounding area!! I was overwhelmed! Certainly, this was more information than I had found on the internet!

The first thing that I noticed as I sat down to look through the binders was the large stained glass window at one end of the room.

It turns out the window is a replica of one found in the pre-Norman church at Fal Mor of St. Deirbhile. According to legend, St. Deirbhile arrived at Fal Mor after running from a prince who was interested in her. The prince caught up to her here and in asking him why he was interested in her, he told her it was her beautiful eyes. She plucked out her eyes and tossed them on the ground. The prince left, and where her eyes had fallen water sprung forth. She washed her eyes in the water, restoring her eyesight! Today, this spot is known as St. Deirbhile’s well and it is alleged that water from this site will cure eye complaints.

After learning about St. Deirbhile, I began to look for references to my ancestors, and while I did not find any, I did find out why they perhaps chose to settle in Erin Prairie, Wisconsin when they first arrived from Ireland. It turns out that Erin Prairie was mainly an Irish immigrant settlement. There was also a binder that supposedly contained information about the history of the Minehans’ and the Lavelle geneology, but unfortunately it was not available as the center is currently working on creating electronic files of everything. Marina was nice enough to let me write down my e-mail address and the information I was looking for, so hopefully I get an e-mail from the historian there in the next couple of weeks!

After enjoying the complementary tea and going through the binders, John and I headed off to find a good view of the Islands, which it turns out isn’t very hard when you are on a peninsula. 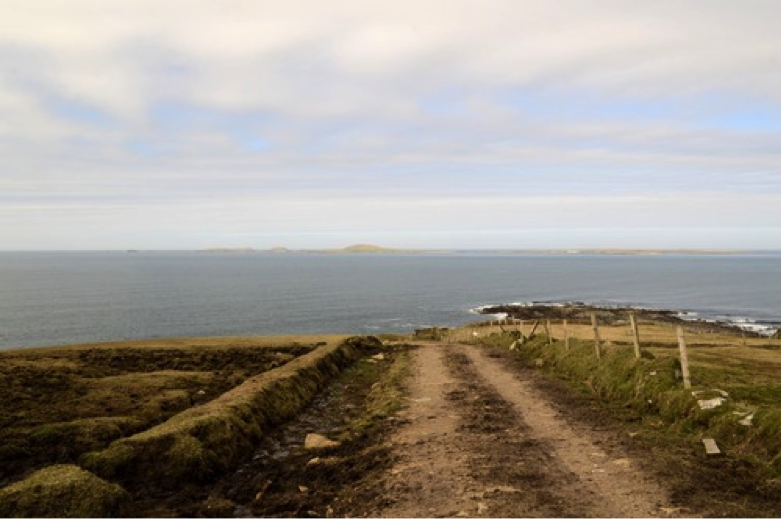 Though it does not look like it in this picture, the Islands looked like they were actually pretty close. You could actually make out the beaches on them. 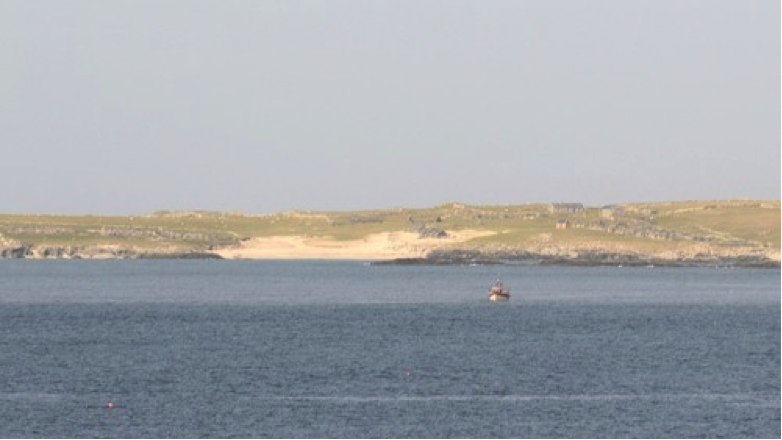 It felt so strange to stand there looking at the place that my ancestors had left behind forever. They had left Ireland, never expecting to return, and here I was, in Ireland, standing on the shoreline of the Mullet Peninsula and getting my first glimpse of the Inishkea Islands! In the exact same spot that they perhaps had their last glimpse. 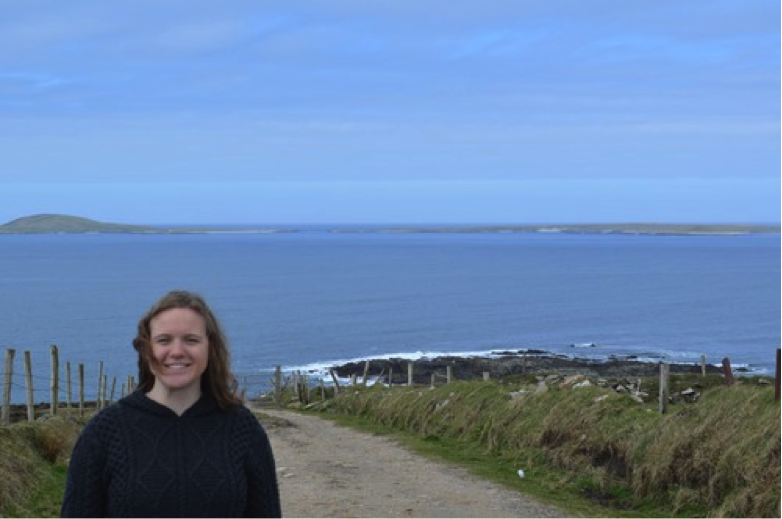 I can only hope that someday I can afford to come back in the summer and be able to not just see the Inishkeas but will get to “rise and go 'To Inishkea.'”

I’ll rise and go to Inishkea,
Where many a one will weep with me–
The bravest boy that sailed the sea
From Blacksod Bay to Killery.

I’ll dress my boat in sails of black,
The widow’s cloak I shall not lack,
I’ll set my face and ne’er turn back
Upon the way to Inishkea.

In Aran Island, cold as stone,
I wring my hands and weep my lone
Where never my true love’s name was known:
It were not so in Inishkea.

The friends that knew him there will come
And kiss my cheek so cold and numb.
O comfort is not troublesome
To kindly friends in Inishkea!

‘Tis there the children call your name,
The old men sigh, and sigh the same;
‘Tis all your praise, and none your blame,
Your love will hear in Inishkea.

But you were dear to beast and bird,
The dogs once followed at your word,
Your feet once pressed the sand and sward–
My heart is sore for Inishkea.

I’ll rise and go to Inishkea
O’er many a mile of tossing sea
That hides your darling face from me.
I’ll live and die in Iniskea!

-poem by Katherine Tynan
Posted by Unknown at 2:30 PM