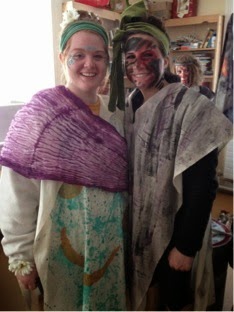 It was quite the experience to celebrate Saint Patrick’s Day in Ireland. We started the morning off with preparing to be in a parade with the Louisburgh HQ Street Art. In the parade I was what they called a beautiful person who wore bright colors. I was going to originally carry a rain stick object around, but plans changed and I ended up caring a heavy banner around instead. It was challenge to carry the heavy banner around the block due to the wind. Other people in my group, that were not apart of the beautiful people, were known as the enemy, and wore black and red clothes with war type face paint with huge shields and drums to carry around. That part of the group was probably the loudest of the whole parade. After the parade, our group headed back to hang around and play some games outside. But due to the cold weather we decided on inside games were more favorable. We finished up the day by going to the local pubs, and enjoying the busy atmosphere. I could of not ask for a better group to celebrate Saint Patrick’s Day with, and I hope one day to make it back to Ireland again on March 17th.