It was successful day at Urozero.  The group of people consisted of an approximately equal amount of Americans and Russians.  We met at the university around 9:45 a.m. and like usual, some of the students were running late due to miscalculations of public transportation.  Luckily, we were able to depart shortly after 10 a.m..  The bus ride was a brief 20 minute journey.  When the bus arrived at Urozero we were allowed to move around freely and explore, which was very nice not to be “on a chain.”  Everyone was in a very relaxed mood because the weather was beautiful (17°C) and sunny, which was definitely the best weather we had experienced since we arrived in Petrozavodsk.  Initially, everyone went their separate ways.  Devan and Liz took a modest stroll around the camp.  Karen, Morgan, Tia, and Alina went for an adventurous expedition in a row boat, luckily the wind wasn’t heavy or they probably would have been doing circles for hours! J Neil went swimming in the lake for approximately an hour.  It is still a mystery how Neil was able to withstand the frigid water for that long, because the temperature was probably under 10°C.  Ryan, Adam, Brett and Ivan (the Russian who won) played an unofficial game of basketball for a while until it became tiring.  The women came back to shore, some people were sunbathing while Ryan and Brett jumped off the pier. 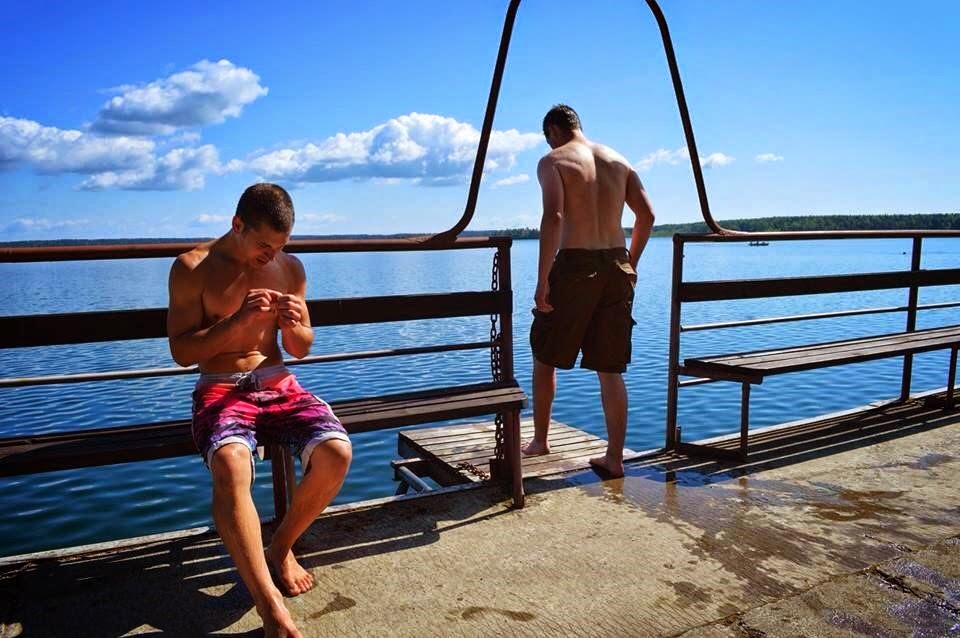 Soon after these early morning events a big group of Russians and Americans joined together to play a game of “futbol” aka soccer.  There was a dramatic concern from the older Russian gentlemen that Ryan couldn’t play because his only footwear was sandals, but he played anyway.  It was Haley’s first time playing a game of soccer and it just so happened to be in Karelia.  By the way, she did very well.  Zhenya, who is an experienced soccer player, showed everyone how Russians play the game of soccer.  He scored multiple goals, including an open netter! 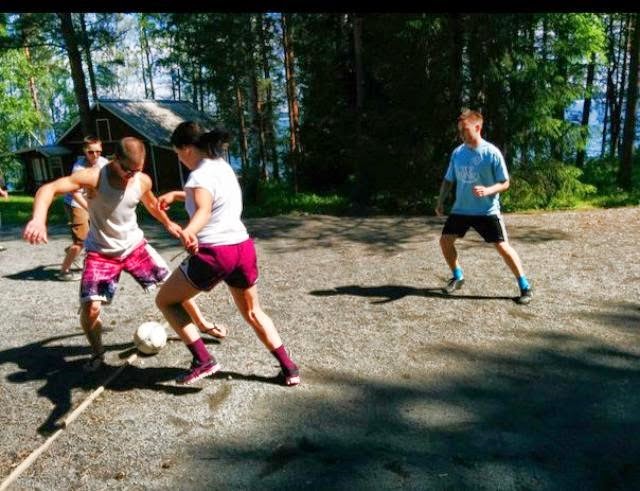 I think we all learned how soccer can be a dangerous sport.  Some spectators were hit by the soccer ball.  One of the Russian students was hit in the eye, and Svetlana’s young daughter Liza was hit in the foot which made her cry. L  Ryan was bleeding from the finger, foot, and knee, what’s new?  Overall, soccer was a success and many people were able to play, including the American professors Karen and Jamie.  Though many people didn’t play, they found other activities around the camp to keep them preoccupied such as photography, sunbathing and relaxing.  After soccer, everyone migrated to the mess hall and munched down some soup, bread and veggies.  I think Adam was slightly sketched out that the camp obtained their water straight from the lake, but it’s always a learning experience!
After lunch, the beautiful young women took advantage of the banya for about 45 minutes, which was surely not long enough to banya.  Also, they all had the courage to jump in the lake after coming out of the banya.  It shows how they really wanted to get the full Russian banya experience, plus it was well needed after being in 100°C banya.  After the ladies, the men had their turn to take a banya and there were many more men who desired the banya than women.  I counted 10 guys inside of the 6-person banya, which left 4 of us standing including me.  We did 1 round, jumped in the lake, came back and this time the American students went nude, because we felt it was awkward to wear our plavki (swimsuits) while all the Russians were butt naked.  It was a good experience and we all beat ourselves with the birch boughs.  Adam and Neil didn’t go to dachas the previous weekend, so it was their first time banyaing and probably a very memorable one. 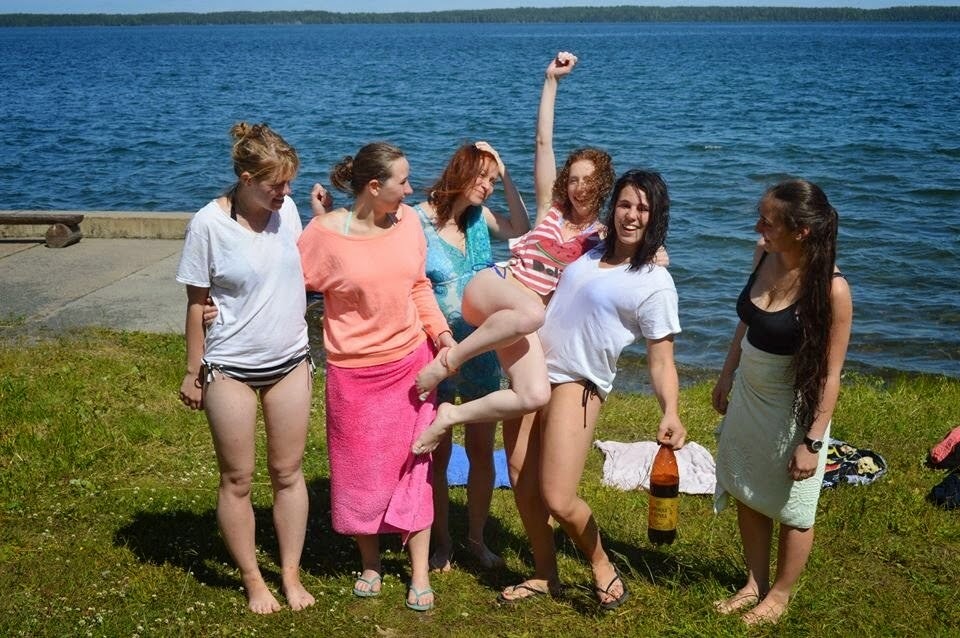 After banya it was approximately 3-3:30 and by this time everyone was fairly exhausted from swim, banya, sun, and playing a wide variety of athletic activities.  A few of us played a very strange game of volleyball with essentially no rules.  Lena, one of the Russian gals, was making these very creative flower wreaths that could be worn on a person’s head.  Morgan was hanging out down by the lake enjoying the wonderful weather and a few students were waiting for the bus to come. The bus arrived around 4:30 and it was time to load up and drive back to the university.  The bus ride home was a quiet one and most people were exhausted from all the physical activity at Urozero.  Although we were all wiped out, I think most people enjoyed the trip and the weather couldn’t have been nicer! 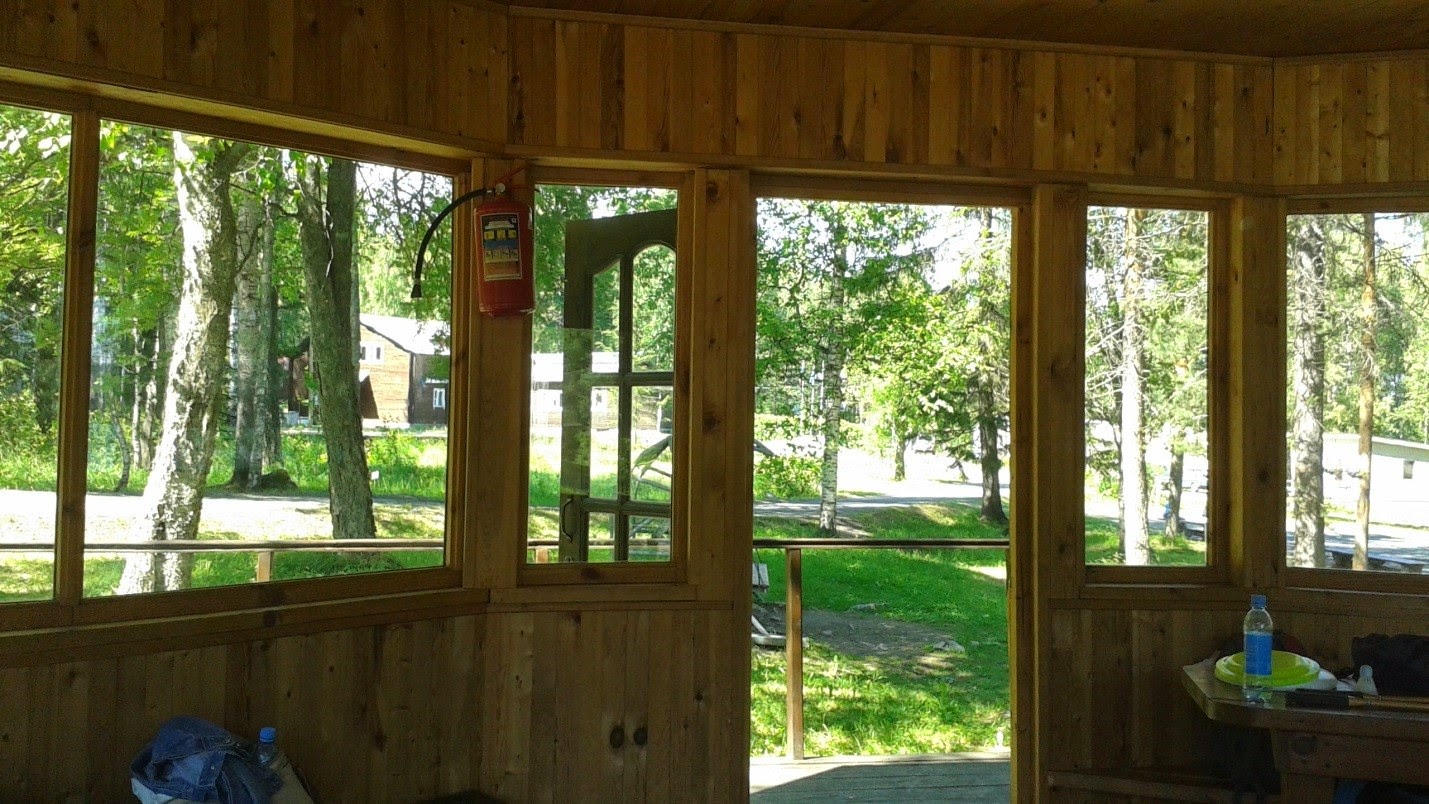 My own thoughts on the trip:
I’ve learned that not all lakes and rivers in Russia are cloudy and polluted, and Urozero was a very clear, cold and seemingly clean lake.  People must be careful walking in the water though because there were many rusty pieces of metal.  Now I also think the Americans have a better understanding of the passion that Russians have for futbol (soccer) because the older Russian guys were quite serious about the game.  I’ve also found out that it’s a wise idea to wear full shoes when you play soccer, not sandals because the feet will bleed.  Another strange thing that I noticed at the Urozero camp was that the outhouses didn’t have gas vents.  Who seriously built those outhouses?  Even an idiot would be smart enough to install a simple pipe through the roof to exhaust the smelly gases from the waste beneath.  One word to future travelers of Urozero, change into your swimsuits outside because it stinks in there!  It was very nice to have freedom to do what we desired during this event, and I’m glad we were able to go there.  It was also very nice to spend some non-school related bonding time with the Russians, and I wish more of the Russian students came with.  It was a fun day by the lake, and I’m glad I got to banya again, even though there were way too many naked guys packed into that small room.  I’m going to build a banya/sauna hybrid at my house in MN, so I can get the best of both Russia and Finland. J  Это всё.
by Ryan Puzel
Posted by klr at 3:29 AM