While in Petrozavodsk, our group had many opportunities to experience both traditional and modern aspects of Russian culture. One of these opportunities involved attending a Russian rock concert. For me personally, just getting into the venue where the concert was to be held was a challenge. This was due to the fact that I was navigating our journey in a wheelchair. Needless to say, the entire trip was a bit of an adventure. Never have I been so grateful that I can, in fact, walk the majority of the time. However, that evening the real challenge was the sheer number of stairs we had to climb just to get into the building. Thanks to my wonderful fellow travelers, who carried my chair up the vast number of stairs, we finally entered into the club. When you first enter, it takes a few seconds for your eyes to adjust to the drastic change in lighting. It definitely gave me that "underground club" vibe. Between the muted purple and green lights and the underground bunker feel, lay a small local music scene. 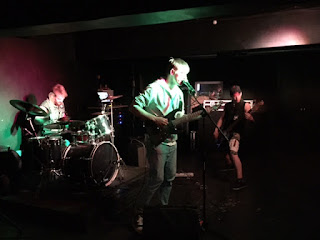 As we arrived and began to settle in, the first band slated for the evening were finishing up their sound check. Towards the back side of the room there was a small bar and some tables and booths.
Over the course of the evening we listened to music by three different groups with very different music styles. The first group performed a mix of heavy metal and some bordering on screamo. The second group was fronted by a man named Vova, a guitarist/vocalist who was a friend of some our group leaders. His music seemed heavily influenced by Nirvana. The third and final group were, in my opinion, the most musical talented out of them all. They played a variety of rock pieces, including a piece by the group Arctic Monkeys.While I sensed less enthusiasm from the majority of the group, the music enthusiast within me was perfectly content to simply sit and absorb the good vibrations heading my way.
by Kaytlin Hintz-Knopf
Posted by klr at 2:41 AM