When I first saw the Urozero sign I thought I had been mispronouncing the Russian word for lake my entire life. Apparently, Urozero is just the name of the ozero, or lake, that we visited on our first Sunday in Petrozavodsk. I really enjoyed this one-day experience growing closer to my fellow Americans and Russians and in my understanding of Russian culture.
The day was full of fun and games. Morning began with a classic Russian sport—Футбол! Futbol! As one of the team captains, I selected my teammates and lined up to play. Soccer is the most popular sport in the world, played on anything from small gravel fields to the large pristine grass of the ongoing European Championships. However, the game is the same wherever it is played. Soccer draws people of different nationalities and unites them as one people. Our game united Americans and Russians, young and old, and ended in an animating 5-5 draw.
After cooling down from футбол I joined a group playing billiards and ping-pong. I quickly learned that “Russians like hard challenges” in the words of Vadim. The billiards table had smaller pockets and bigger balls than I am used to, making scoring considerable more difficult. This only enhanced our camaraderie, though, as we all laughed when the easiest of shots were missed time and time again and all rejoiced when a ball was finally pocketed. 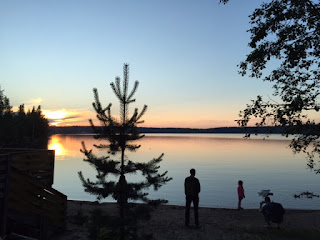 After a satisfying lunch and some quick games of Дурак (Durak, a Russian card game in which the player left with cards at the end is designated the fool), it was time for the баня! (banya, the Russian sauna) Even though Russian blood runs through my veins, I had yet to experience a real banya until this day. My fellow Americans and I were excited to join the Russians in this long-held Russian tradition,Men and women go to the banya separately. Upon entering the banya, Igor told the group, “when in Russia, do as the Russians do”. After seeing exactly what he meant by this, we too stripped off all our clothes and joined him in the steam room. The intense heat hit us as soon as we entered the steam room. At first it was painful to sit on the benches and keep my eyes open. Then I was introduced to the strikes of the веник (venik) branches, all the while sweating profusely. However, I was humbled by the feeling of camaraderie in the room. This was a type of intimate connection with adults and newly-made friends that we do not have so easily accessible in the United States. I will certainly remember and cherish that connection. A few minutes later we quickly threw on our swim trunks (плавки) and ran down to the lake. I was the second guy to jump in and feel the cold refreshment. The Russians say that the mix of the hot and cold is healthy for the body. After a couple more rounds, I couldn’t agree more.
by Alex Mikhailov
Posted by klr at 8:26 AM